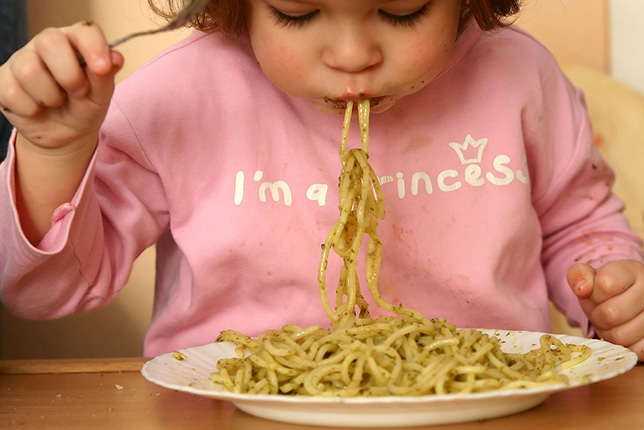 Most of us take eating for granted. However, when you analyze it, eating is more difficult that walking or talking and it takes 26 muscles and 6 cranial nerves to produce a single swallow. It is a vital function for survival and growth. When pediatric feeding difficulties are present, the child cannot thrive either physically, cognitively or emotionally.

Sucking and swallowing are only instinctual in the first few weeks of life. After that, these actions must be learned and early intervention becomes critical. However, there is a general lack of awareness on how to diagnose and treat pediatric feeding difficulties and families are often bounced around from one medical professional to another trying to figure out what is wrong and how to fix it.

If the sucking, eating and swallowing actions are not learned properly, it then makes learning language almost impossible.  Over a million children have been diagnosed nationwide, with many thousands who do undiagnosed. There are also 80% of children with developmental disabilities who have feeding issues.

SHOWWhat is a feeding disorder?

A feeding disorder is characterized by difficulties eating or drinking that negatively effect weight gain and/or nutrition. Difficulties can include deficits such as ineffective chewing and may be accompanied by inappropriate behaviors, like tantrums, associated with mealtimes. Feeding disorders can range in severity from mild to severe, potentially requiring alternative means of nutrition to maintain appropriate weight and nutritional status.

SHOWWhat is a swallowing disorder?

A swallowing disorder, also known as dysphagia, is the decreased ability to manage secretions, transport liquids or chew solids to adequately initiate and execute an effective swallow. An individual with dysphagia is at an increased risk for food or liquid to enter the airway before, during or after the swallow, known as aspiration, which can lead to respiratory complications such as pneumonia.

SHOWWhy some children have feeding or swallowing difficulty?

Children may have feeding difficulties as a result of a complex interaction between multiple factors. Early experiences with pain during eating, which may be related to reflux, may cause the child to stop eating and develop behavior or refusal to eat make it difficult for the parent to feed the child, which can lead to delay in the development of appropriate oral motor skills required to be a successful, independent eater. Some children may have peculiar feeding patterns or experience food jags which negatively impact their health or socialization. Finally, medical diagnosis and underlying conditions which may also contribute to difficulties include Autism, Cerebral Palsy, Cardiac conditions, Craniofacial anomalies, prematurity, failure to thrive, gastroesophageal motility disorders, genetic syndromes, oral-motor dysfunction, metabolic disorders, food allergies, or short bowel syndrome, can all result in feeding dysfunction or dysphagia.

SHOWWhat are some of the signs or symptoms of a feeding or swallowing disorder?

Although many infants seem to be born with an innate ability to suck and feed successfully, some may experience varied levels of difficulty ranging from mild fussiness, reduced intake (resulting in poor weight gain), to unable to feed by mouth that requires artificial means of nutritional support such as a nasogastric tube. Causes of feeding issues in infants are commonly associated acid reflux, inadequate oral muscular development (such as in premature infants), or immature neurological system (for example, congenital disorders or fetal alcohol syndrome/drug withdrawn). Children with complex medical diagnosis (Cerebral Palsy, Cardiac conditions, Craniofacial anomalies, genetic syndromes, metabolic disorders, etc) may also have accompanied swallowing disorders.

Most pediatricians now understand and advocate introducing semi-solid foods like baby cereals at around 5-6 months old, instead of anytime earlier, because a baby’s gastric system does not mature until then to handle supplemental foods. Once semi-solids are introduced, progression over textures should occur over the next 6-7 months, allowing older babies to develop oral skills from munching increasingly thicker textures to chewing soft cooked foods that resemble cut-up table foods. Feeding difficulties at this stage typically result in rapid weight loss (if the baby also begins to loss interest in bottle or breast-feeding), or the child may exhibit excess gagging, vomiting, and food refusal behaviors and has a hard time transitioning to more advanced textures.

For young children, feeding issues may become evident at this age as they previously have gained weight well on formula/breast milk and have been eating some baby foods or crunchy, quickly dissolved textures like crackers, cookies, and cereals. However, they did not broaden the food types they accept and often continue with a extremely limited foods relying largely on milk for protein and caloric intake, or their weight begins to drop and may later be diagnosed as Failure to Thrive. These children may have oral sensory dysfunction and oral motor delays that interfere with their ability to accept and manage wet, soft, or mushy textures. Some, however, may also have underlying neurological disorders such as Cerebral Palsy and Autism.

Feeding disorder in older children often manifests as extremely limited food selectiveness, avoiding or omitting an entire or several food groups such as absence of vegetables or meats. Although the child’s weight may be stable, it tends to be on the light side. Mealtime anxiety and struggles may also become common. Eating out with family sometimes becomes impossible.